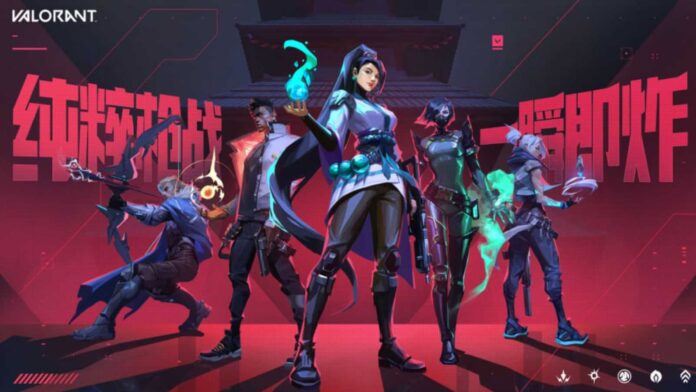 Riot Games just released an update on VALORANT game health discussing map diversity and how Riot Games are tuning this for competitive queue.

A common issue that players come across previously is the frustration of playing the same map multiple games in a row. Recent changes have massively reduced the probability of this happening.

EDITOR’S NOTE: This article is a part of a series of deep dives on topics in Gameplay Systems, specifically the Competitive/Social & Player Dynamics space of VALORANT. Learn more about the series in our intro. You can also read our previous articles on AFKs, and voice and chat toxicity.

Hello again! I’m Brian Chang, a member of the Competitive team on VALORANT. This article is going to be a bit different than previous ones in the Game Health series, focused on a very specific topic: map randomness.

If you’ve ever wondered how it was possible for you to play Icebox for 4 games in a row, you’ve come to the right place!

This isn’t too surprising. Playing the same map gets stale quickly, and limits the type of challenges that you face in the game. As a result, we wanted to make sure that we could improve the diversity of maps played without compromising the health of matchmaking (by influencing things like queue times or match balance).

To explain what changes we made and the results of those changes, let’s first take a look at what the old system looked like.

When the game initially launched, map selection was truly as random as it could be. When 10 players entered a match, our matchmaker would randomly choose any of the available maps (back then, we had a total of 4 maps). All maps had an identical chance (25%) chance of being chosen, regardless of whether a player had played that map recently.

Obviously, with only 4 maps available to choose from, players were experiencing consecutive maps quite a bit. Here’s what the distribution of consecutive map streaks looked like during this time period:

We quickly realized that “full random” selection was not ideal—no matter how much you love a map, 5 consecutive games on Ascent can get stale pretty fast. To combat this, we implemented a “pseudo-random” selection system, aimed at showing maps a player hadn’t seen in recent games.

This method favored maps that were, on aggregate, not seen by the 10 players in a game. It also heavily punished maps that any player had experienced in a streak recently.

Long story short, we aimed to reduce the number of streaks encountered, but the selection itself was still a weighted “random” choice. In other words, it was less likely for someone to get unlucky and experience a streak, but it was still very much possible to get unlucky. For instance, a game could have a handful of players who recently played games on Split. This could lead to Split having a mere 5% chance of being selected as a map. However, that 5% chance meant that some players would see the Split 4, or even 5+ times in a row.

Here’s what the new distribution of consecutive streaks looked like: 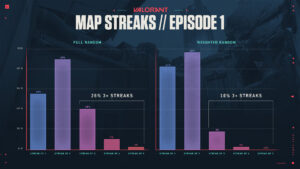 As you can see, the number of players experiencing a streak of 3 maps or more went down significantly (26% in the “truly random” method vs. 10% in the “pseudo-random” ticket method).

As we introduced more maps to the pool, we saw significant reductions in how often players were encountering streaks of the same map. Here’s what the streak distribution looked like as we released more maps (with no major changes to our map selection methodology):

Just by increasing the number of maps possible to play, the number of 3+ streaks went from 10% to 3%, with no changes in map selection methodology!

The results of the changes up to now led to a significant improvement, enough for us to think that our work here was done for the time being. Your feedback, however, told us there was more to be done.

In a survey sent out to players in North America around March of this year, 67% of players responded that they feel like they’re encountering the same map multiple times in a row “Often” or “Very Often.”

This was pretty alarming to the team; despite the improvements that we saw in our telemetry, the player perception was that map streaks were still pervasive in the game. On top of surveys, we were also seeing a pretty cyclical weekly “why did I get Icebox 3 times in a row?” Reddit/Twitter post.

We decided to explore improvements to the system one more time. Specifically, we realized that what you were asking for wasn’t more “random” map selection, but a more diverse one. By trying to make selection random via the old system, we weren’t fully minimizing the “bad luck” scenarios that you were experiencing.

So instead of making map selection a random process, we instead opted to create a deterministic choice that always selects the map that minimizes streaks. If a certain map showed up too often in your recent history, we would remove that map from the selection pool altogether. From there, we would always choose the map that the 10 players in the lobby had seen the least.

The change was implemented in Patch 4.04, first with a regional test in LATAM, then rolled out to the rest of the world. It was important to us that these changes didn’t increase queue times or worsen match balance, since adversely affecting either of those metrics would be a much more costly tradeoff for us to make.

Here are the results of the most recent changes to map streaks:

The most significant improvement thus far! The percentage of players experiencing the same map 3 times in a row has now dropped to 0.06% (1 in every 1700 or so players). What’s more is that in this week period that we looked at in Competitive queue, exactly 8 of the several million players saw the same map 4 times in a row. Fun fact, 2 out of those 8 are serial queue dodgers that avoided specific maps (for the other 6, sorry about the insanely bad luck). No player saw the same map 5 or more times in a row. This was done with zero negative impact to queue times or match balance.

There are other metrics that we tracked alongside map streaks, like how often you saw the same map frequently (not necessarily in streaks), and how long it took before you played each map at least once. Both of these metrics also improved significantly after the changes we made in Patch 4.04.

As we mentioned in the most recent Ask VALORANT, we do believe that there are times when agency around map selection does make sense, specifically when it comes to coordinated, high-stakes, competitive team-play, like our planned tournament mode.

At this point, we feel relatively confident that deterministic map picks alleviate much of the pain regarding diversity in map selection. Our most recent surveys also show that sentiment improved after the changes. We’ll continue to monitor our data to see if any additional changes need to be made, but so far, the changes seem good!