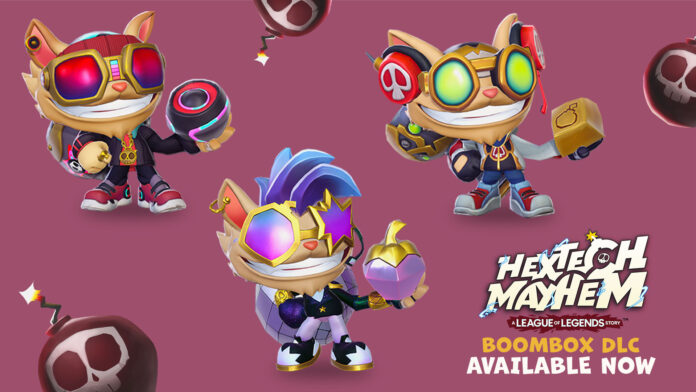 Today Riot Forge revealed that DLC for Hextech Mayhem: A League of Legends Story™ is now available for purchase.

Hextech Mayhem: A League of Legends Story™ is a rhythm runner developed by Choice Provisions, creators of the BIT.TRIP series. Set in the League of Legends universe, players step into the explosive shoes of Ziggs and must perform bomb-jumps and bomb-attacks to the beat of a toe-tapping soundtrack, to avoid obstacles, disarm enemies, and light fuses for satisfying and explosive chain reactions to achieve maximum mayhem.

Now, players can experience some of Riot Games’ most iconic tracks from the past decade with the release of the BOOMBOX DLC packs, allowing Ziggs to explode to the beat of many notable music moments from League of Legends history, while dressed appropriately with a special themed skin included with each set.

The three BOOMBOX DLC packs are:

The three BOOMBOX DLC packs are now available to purchase on Nintendo Switch™, PC via Steam®, GOG.com, and the Epic Games Store, each priced separately at $2.99. A copy of Hextech Mayhem: A League of Legends Story™ on the same platform is required to play this content.

Also available today is a patch for Nintendo Switch™ players that optimizes performance and adds quality of life improvements, including controller remapping.

For those playing the game through the Netflix mobile app, the K/DA Ziggs, Pro Gamer Ziggs, and True Damage Ziggs skins will be accessible free of charge. The BOOMBOX DLC tracks will not be available to play on Netflix.

NBA® 2K22 Adds New Features to MyNBA for PlayStation 5 and...