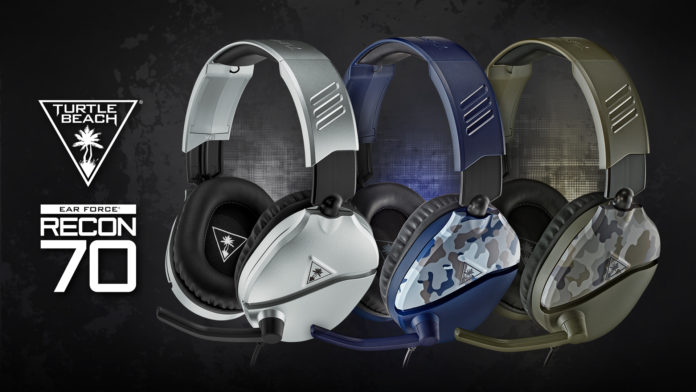 A Variety of Colors, Multiplatform Compatibility, Powerful Sound, Lightweight Comfort, and a MSRP of 34.99€ make the Recon 70 An Easy Choice for Gamers Looking for a Great, Affordable Headset 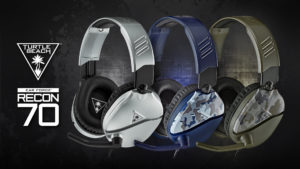 Leading gaming audio and accessory brand Turtle Beach (NASDAQ: HEAR) announced three new colorways for the Company’s best-selling* Recon 70 gaming headset. The all-new Recon 70 Silver is available now for pre-orders at www.turtlebeach.com and will be available for purchase at select retailers in participating territories as of 13th March. Additionally, two new Recon 70 Camo versions – Green Camo and Blue Camo – are available now for pre-order from Turtle Beach additional international territories, and will launch worldwide on March 13, 2020. The new Silver and Camo colors make nine total Recon 70 options for gamers to choose from, each one delivering the immersive sound and lightweight comfort gamers expect from the headset giant. Powerful 40mm over-ear speakers, crystal-clear mic performance, leatherette-wrapped cushions, and multiplatform functionality with Xbox One, PlayStation®4, Nintendo Switch™, PC and mobile devices, plus a MSRP of 34.99€ make the Recon 70 an easy choice for gamers looking for a new, affordable headset.

“Our Recon 70 series gaming headsets have been doing great since they launched last April, becoming the Company’s best-selling* headsets on multiple platforms, so we’re excited to give fans even more color choices as they gear-up for another great year of gaming,” said Juergen Stark, Chairman and CEO, Turtle Beach. “With new consoles on the horizon, the Recon 70 Silver and Camo options are great choices for gamers looking to get a new high-quality gaming headset for less than 40€.” The Recon 70 series gaming headsets come in a variety of colors. The Xbox One and PS4™ models are available in both black or white with green and blue accents, respectively, while the Nintendo Switch version has a black frame with signature red accents. Also available at participating retailers is a unique midnight red version of the Recon 70 for PS4. As a passive, wired gaming headset, the new Recon 70 Silver and Recon 70 Camo versions, as well as the aforementioned Recon 70 colors, will work with all game systems, PCs, and mobile devices with a standard 3.5mm jack. For more information on the latest Turtle Beach products and accessories, visit www.turtlebeach.com and be sure to follow Turtle Beach on Facebook, Twitter and Instagram.

The Global Conference with local industry insight from Berlin, San...