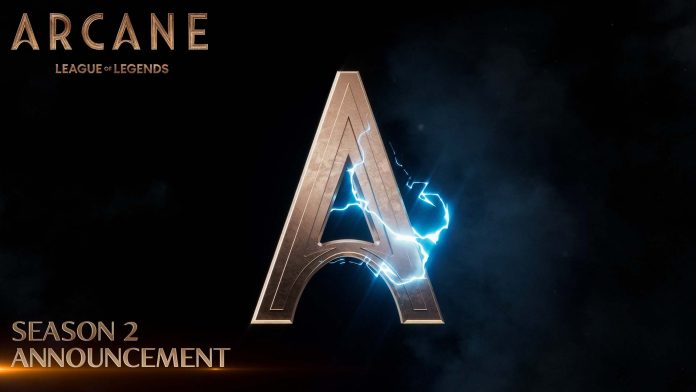 Based on the world behind League of Legends, Arcane dives into the delicate balance between the rich city of Piltover and the seedy underbelly of Zaun. Known across Runeterra as the “city of progress”, many of the most brilliant minds call these cities home. But the creation of hextech, a way for any person to control magical energy, threatens that balance.

While Arcane holds the backstories of League of Legends characters, the series is designed to stand on its own as a complex world filled with moral decisions, breathtaking animation, and suspenseful storytelling.

“We’re beyond happy about the positive response to Arcane’s first season and are working hard with the creative wizards at Riot and Fortiche to deliver our second installment,” said Arcane co-creators Christian Linke and Alex Yee.

The rest is under wraps!

About Arcane
Netflix and Riot Games bring the global phenomenon League of Legends franchise to television with the animated event series Arcane. The series will also be available on Tencent video in China and marks Riot Games’ first series for television. Set in Riot’s globally popular League of Legends IP, Arcane is an animated series developed and produced by Riot Games in partnership with Fortiche Productions. TWITTER & IG:  @arcaneshow

About Riot Games
Riot Games was founded in 2006 to develop, publish, and support the most player-focused games in the world. In 2009, Riot released its debut title, League of Legends, to worldwide acclaim. League has gone on to be the most played PC game in the world and a key driver of the explosive growth of esports. As League enters its second decade, Riot continues to evolve the game while delivering new experiences to players with Teamfight Tactics,Legends of Runeterra, VALORANT, League of Legends: Wild Rift, and multiple work-in-progress titles, while exploring the world of Runeterra through multimedia projects across music, comic books, TV, and more. Riot has also launched a publishing group, Riot Forge, to collaborate with third-party developers on additional games set in the League universe. Forge’s first title, Ruined King: A League of Legends Story, is a story-driven, turn-based role-playing game (RPG) being developed by Airship Syndicate. Founded by Brandon Beck and Marc Merrill and led by CEO Nicolo Laurent, Riot is headquartered in Los Angeles, California, and has 3,000 Rioters in 20+ offices worldwide. TWITTER:  @LoLUKN

Holiday Season Event: Find and rescue Santa in the world...