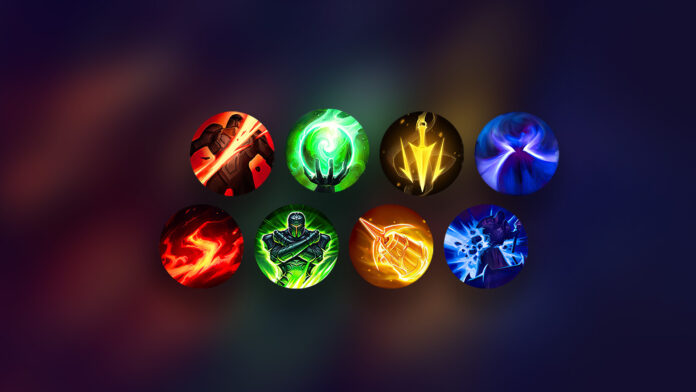 Hello everyone! One of the most anticipated and requested updates has been for more runes and today we’re excited to talk about the new keystones and minor runes we released at the start of our Time & Tide update! We introduced two new keystones and six new minor runes, two in each tree! It’s been a while since we’ve made a major update to our Rune system and we hope these new additions can give you some more options for how you build out your champions as well as open up some new playstyles. Let’s dive in!

For auto attacking champions, Conqueror has conquered its competition and been the go-to rune for them for a while now. We’ve introduced our first new keystone, Lethal Tempo to break up conqueror’s dominance. Every auto grants you a stacking buff to your attack speed, making it perfect for those consistent auto attackers like Ashe or even Kayle.

If you’ve played League of Legends you may be getting some deja vu here. And you kind of are… but also aren’t. We’ve turnt one of League’s popular mythic items into a unique Keystone! Kraken Slayer, is great for marksmen and other champions to cut into tanks and other meaty enemies. Every third basic attack against the same target deals additional true damage. If you’re up against a team with some tankier foes, Kraken is there to lend you an assist and help you cut through their front line.

Brutal is one of the most popular minor runes in the game right now. We’ve made some attempts to break up this… brutal imbalance with some adjustments to other runes in this tree, but it’s still been a dominating choice. So, we’ve added in some new additions that can help burn away at this Brutal domination.

Scorch is a perfect rune for harassing in the early game. Dealing ability damage to an enemy champion will deal additional damage based on your level, allowing you to burn down your foes and give you some extra oomph in those earlier skirmishes.

Giant Slayer does exactly what it says it does. Cuts down the giants! With this rune, you’ll do increased damage the more bonus health a target has. When you’re up against the likes of an Amumu, you can make the Sad Mummy even sadder as you slash through all his tanky stats.

Resolve is all about defense, and we’ve added two new minor runes to help you survive different kinds of engagements you may face on the Rift.

We know some of you want to jump right into the fight and make those game changing plays with your ultimate when you’re playing ultimate-centric champions like Kennen or Morgana, so we wanted to give you a new tool to assist with those plays. Ultimate Shield is perfect for those risky initiations, it grants you a scaling shield after casting your ultimate.

On the other hand, sometimes you’re on the receiving end of those risky plays and your health takes a big hit. Nullifying orb protects your health from falling too low, by providing you a scaling shield that activates when your health gets in the danger zone.

Sometimes, you just gotta go fast. With Nimbus cloak, you’ll get a burst of movespeed when you use your summoner spell, and you’ll be able to ghost through any units. Perfect for a better chance at escape, or a surprise attack as you speed towards your enemy.

With our recent addition of Hullbreaker, we wanted to give those split-push lovers another option. We know that turrets are big intimidating structures, but with Demolish, you’ll charge up an attack that will do big damage and mow down any turret in your path. With this rune, and the other choices available to you, you’ll now be able to push a lane faster than ever.

We hope you’re as excited as we are for the new runes and how they will impact your games. But you’ll notice we made one other rune adjustment this patch. With the addition of Demolish, we wanted to make adjustments to Mastermind since its current design is a bit similar to our new addition. Mastermind is now focused around epic monsters, it will provide additional damage against epic monsters, and additional gold when scoring takedowns on these powerful beasts.

We’re eager to hear all your feedback on these runes, and we’ll be paying close attention to make adjustments and tunings as necessary. We look forward to seeing clips of your new builds and hype plays.

That’s all from us for now, but next time we’ll be bringing the fire with some enchanting updates!

Get ready for December 17th: The Dawning returns