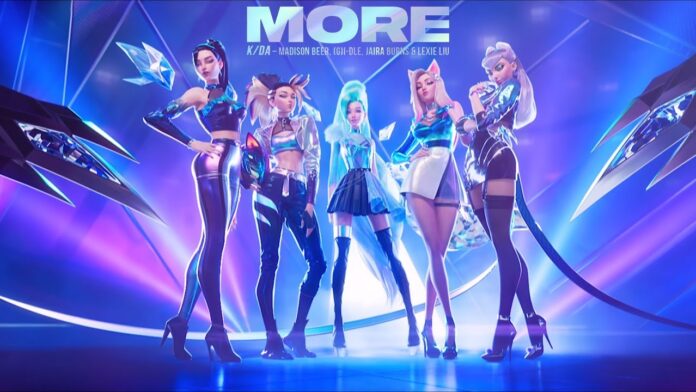 Some of the hottest rising music stars across Europe have recorded their own spin on K/DA’s newest single, MORE

MORE is the title track on virtual music supergroup K/DA’s upcoming EP ALL OUT, which is releasing next week on November 6, 2020. The EP will have five tracks total: THE BADDEST, MORE, I’LL SHOW YOU, DRUM GO DUM, and VILLAINS.

K/DA is not only known to LoL players: the virtual K-Pop band founded by Riot Games, whose 4 members can also be found in the LoL universe, has already achieved immense success. With just two tracks released so far, K / DA has already recorded over 200 million streams on Spotify, as well as several hundred million views of the music videos on YouTube.

“We’re delighted to continue our ongoing partnership with Warner Music – alongside their status as the Official Music Partner of the LEC (League of Legends European Championship) in 2020”, said Alban Dechelotte, Head of Sponsorships & Business Development EU at Riot Games. “The new tracks recorded, by some of the most exciting upcoming artists across the region, are a fantastic example of the unique experiences we can create together. Each version, in a unique local language, provides a completely new listening experience – one we hope our players will love as much as we do.”

“By being the exclusive music partner of the League of Legends European Championship for the past two years now, we were able to promote our amazing artists and their music to a highly attractive target group” explains Oliver Thienhaus, Director Paid & Owned Media, Warner Music Central Europe. “This successful collaboration will now be continued by pairing five of our hottest artists across Europe with RIOT’s virtual supergroup K/DA, thus creating a unique music collaboration, which has never been seen before.”

Legends of Runeterra Officially Releases for PC and Mobile