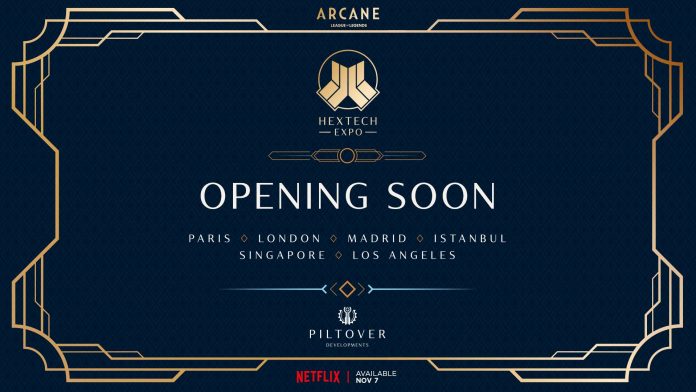 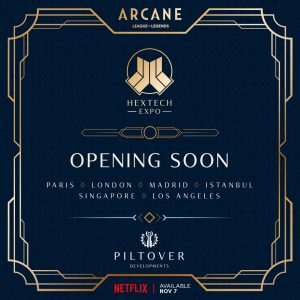 ‘GET EXCITED’: RIOT GAMES PRESENTS THE FIRST HEXTECH EXPO – BRINGING INNOVATIONS AND SURPRISES FROM ARCANE TO CITIES ACROSS THE WORLD

Starting in Paris today, fans can get a sneak peak and interact with valuable Hextech technology through the windows of each location

Six cities worldwide will co-host the first-ever Hextech Expo this month, bringing the technological advances of Arcane’s Piltover into the real world.

ARCANE launches globally on November 7, 3:00am CET, on Netflix, with the first episode live and co-streamable on Twitch

Piltover, known as the City of Progress within Arcane and League of Legends, has harnessed the power of magic, through Hextech, to create a treasure trove of immensely powerful, barely believable, and intensely desired tech that would wreak chaos in the wrong hands.

Launching in Paris (with the storefront unveiled today), the Hextech Expo will also travel to London, Madrid, Istanbul, Singapore and LA as part of a connected experience for fans. Ahead of opening night, visitors to each location will be able to preview and interact with amazing Hextech technology in the window displays.

A Riot Games spokesperson says: “I don’t want to jinx it. But we’re confident our new stores will shatter any preconceptions fans have about Hextech – we’re super, mega excited about what’s to come at the end of each location”

Six cities will play host to the world's first Hextech Expo, bringing the innovation of Piltover to residents across the globe.

Journey to Paris, London, Madrid, Istanbul, Singapore & LA for a chance to see the highly-desired Hextech, while you can! #Arcane pic.twitter.com/zq7euX8VfQ