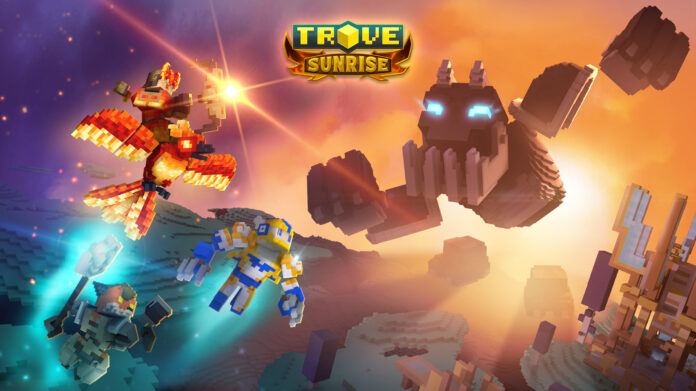 gamigo is happy to announce that the “Sunrise” update for its voxel-based MMO, Trove is out today on PC. ? The new update is one of the biggest ever released for Trove, bringing a new class, a new and unique biome, and much more new content to explore – all for free!

It introduces the Sundered Uplands, a new biome to Trove, that features unique upper and lower levels – the Cloud Layer and the Ashen Wastes, which can have an effect on each other. Many new adventures await Trovians in this challenging new biome, from new Ultimate Bosses in special 5-star dungeons in the Ashen Wastes, to mining the rich resources in the Cloud Layer. But don’t try to fly too high since the Sundered Uplands were declared a “No Fly Zone”.

The “Sunrise” update also shines a spotlight on the new Solarion class. This servant of the Sun Goddess takes down enemies with a combination of his bow for ranged attacks, and a pet phoenix that launches itself at them with fast and fierce melee attacks. Additional abilities for the Solarion include Solar Flare – a charged explosive shot that damages enemies over time – and Guiding Light – summoned pillars that damage enemies and heals friendly targets within their area.

Trove’s “Sunrise” update is out today for free on PC and will be available on PlayStation, Xbox, and Switch coming soon.