THE FIRST SEASON OF RISING LEGENDS CONCLUDES WITH THE EMEA FINALS

Rising Legends, the competitive circuit for Teamfight Tactic players in EMEA, is wrapping up the season with its Finals, where five players will qualify for the TFT Gizmos & Gadgets Championship.

Since the circuit launched in November 2021, thousands of players have participated in Rising Legends through the Golden Spatula Cups and its Open Qualifiers, the ranked ladder, and the Superbrawl.

The Finals will take place on March 25-27 and will see players battle it out for a share of the €20,000 prize pool and one of the five qualifying spots for the TFT Gizmos & Gadgets Championship.

The tournament will consist of six rounds each day, with each day seeing half of the remaining players advance to the next stage of the competition 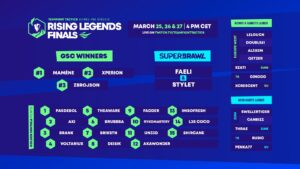 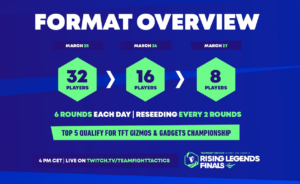 Max Wischow, Product Lead for EMEA TFT Esports, said “I genuinely would like to use this opportunity to thank everybody involved in creating the Rising Legends Tournament ecosystem over the last month, but especially to the Pro-Players, Influencers and the community who have come together to celebrate the best TFT plays within EMEA. The first year of Rising Legends has provided players and fans in the EMEA region with a meeting point for all things competitive TFT and I’m looking forward to continuing our celebration with the TFT World Championship and the launch of Set 7!”

You can catch all of the TFT action in English on the official Twitch channel: twitch.tv/teamfighttactics, as well as in other languages through the Rising Legends Co-streaming program. More information on the tournament, broadcast, and how to participate will be published on the official tournament website.

About Teamfight TacticsTeamfight Tactics is a round based strategy game where players draft a unique team of champions to fight for first place. Your goal? Build your team into an unstoppable force over the course of the game. Recruit champions from a revolving pool, equip them with items, and place them on your board. With an ever evolving meta and competitive Ranked matches, TFT offers countless ways for players to outsmart their opponents.

About Riot GamesRiot Games was founded in 2006 to develop, publish, and support the most player-focused games in the world. In 2009, Riot released its debut title, League of Legends, to worldwide acclaim. League went on to be one of the most-played PC games in the world and a key driver of the explosive growth of esports.