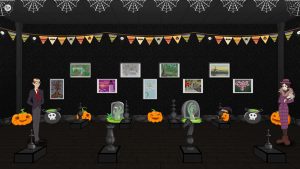 The Mondrian pumpkin carving contest is hosted in collaboration with ArtChops’ annual pumpkin carving contest, which includes other categories such as Digital Art, Game Jams, Traditional Art, and real Jack O’Lanterns. All entries in the Mondrian Pumpkin Carving Contest will receive customized versions of their Steam Workshop thumbnails in a Wooden frame, and a POAP token verifying their submission (delivered throughout the month). The top 3 winners will receive:

To enter the contest, all that’s needed is a copy of Mondrian – Plastic Reality on Steam. Then open up Mondrian Maker and create a Jack O’Lantern level! Optionally, you can visit the game’s Workshop and Subscribe to any pumpkin template, made by Lantana Games or the community, to help you get started. Once your level is complete, click the “Play Your Level” button and select “Open In Studio,” where you can create a thumbnail image. 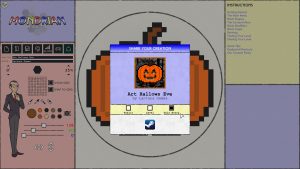 Back in Mondrian Maker, click the Share button, make sure the checkboxes are set to “Public,” “Level,” and “Gala Entry” respectively. Upload your Jack O’Lantern to Steam Workshop and you’re in the contest!

For a more in-depth look at making your own Mondrian Jack O’Lantern, Lantana Games has posted a new tutorial on their Youtube channel:

Contestants may submit as many levels as they like, however they will only be eligible for one reward pack if chosen. Levels will be judged on the following criteria:

All entrants will be contacted individually via the “Private Developer Comments” section in their Workshop item, with updated thumbnails and POAPs (an Ethereum wallet required to claim the POAP, but calm down, it’s free!). Winners will be selected within two weeks of the contest ending (11/14/2021) and, again, contacted with customized Workshop thumbnails and a secure form for shipping, Twitch, and Discord info. Lantana Games will make all best efforts to keep the community up-to-date on judging progress and any issues that may cause delays.

Mondrian – Plastic Reality is available on Steam for Windows. 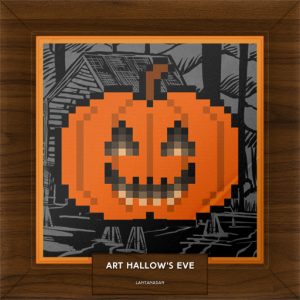 In Mondrian – Plastic Reality, you join Piet Mondrian and his modernist friends on time-tripping heists through art history to uncover their lost works in a colorful, brickbreaking, mind-bending experience with roguelite-esque and creative-centric sensibilities. Included with the game are toolsets that offer artists a new way to share their works with the world. These include Mondrian Maker, an easy-to-learn level editor, and Mondrian Studio, a graphic design suite tailormade for today’s connected creatives. Players can import their own artworks as background images for their Mondrian Maker/Studio creations, and upload those creations to Steam Workshop with the press of a button.

About Lantana Games
Lantana Games is an independent game development studio in Boston, creating games that delight, inspire, and innovate on the artform in surprising, colorful, and positive ways. We’ve built our reputation as a remote studio dedicated to fostering the next generation of game developers. Founded in November 2009, our games have since been featured in numerous publications such as Kill Screen, Polygon, PC Gamer, and The Boston Globe; and at expos such as PAX East and the Smithsonian American Art Museum’s Indie Arcade. Follow us everywhere, @lantanagames!