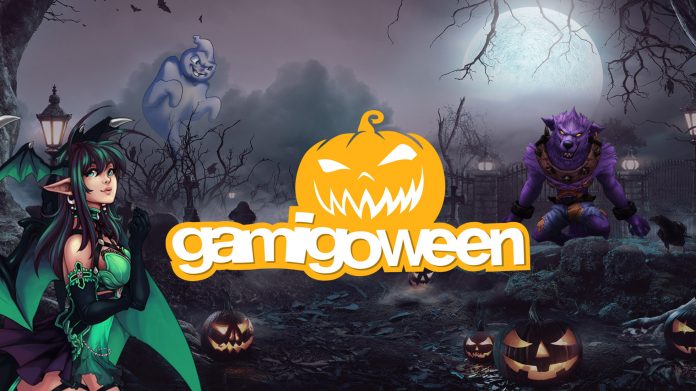 gamigoween is here and it’s up to players to survive our many tricks in order to earn their unique and fun treats!

Fans of gamigo are in for a spectacularly spooky surprise this year! Several of the company’s popular titles are celebrating the most frightfully festive night of the year – Halloween – with plenty of tricks (in the form of in-game events) and treats (i.e., rewards) for players to enjoy.

In no particular order, the following gamigo games are currently holding Halloween-themed events:

• Trove – Shadow’s Eve has arrived in Trove! The event features a number of new quests, including an 11-part adventure where players help new allies – the Order of the Moon – fight off the werewolf curse of Quberus, a new Delve Biome (The Wolves’ Den), new enemies to combat, and new vendors. Several fan favorites are also returning, such as Explosive Pumpkins, Tasty Candy Corn, and pumpkin dungeons.
• Fiesta Online – A tricky new Halloween maze awaits players in gamigo’s anime MMORPG, Fiesta Online, that hopefully won’t cause them to go mad as they attempt to avoid spooky pumpkins on their way through the Maze of Madness! The keeper of the maze, Pumpkin Bob awaits players in the center to offer rich rewards as long as they can win this battle.
• Aura Kingdom – The Hauntings of Azuria have caused plenty of monsters, wolves, and undead to pop up and it’s up to players to fight them off. A Halloween Letter Collection Event, several creepy dungeon crawls, updates to the Bard and Reaper, and plenty of additional holiday-themed events await you in the land of Azuria.
• Last Chaos – Watch out! There are pumpkins and scarecrows looking to cause havoc to players foolish enough to cross their path! Halloween has found its way into the dark fantasy world of Last Chaos from October 26 until November 08, 2021! Players can collect the pumpkin head from the scarecrow to help gather pumpkins, and then take them back to the spooky strawman to receive their treats. He also takes empty baskets and exchanges them for candy. Watch out, because the giant pumpkin boss can appear at any time… he drops a special parchment with a spell on creating a pumpkin pet! Those feeling brave may want to follow Abraxas, the Demon Knight, to the Lost City in Dratan for some Halloween-themed rewards.
• Shaiya – It’s zombie hour in Shaiya! The invading undead need to be defeated quickly but beyond that, players shouldn’t forget to help Pin, Fuse and Lug with their quests! But who doesn’t like a pumpkin spiced zombie smoothie for Halloween? Players collect Bronze, Silver and Golden Pumpkins to craft the permanent wings “The Nightmare before Halloween” and much more. And what’s that waiting there, deep in the desert… a new boss?! Halloween in Shaiya takes place between October 26 and November 21, 2021.
• RIFT – It’s Autumn Harvest once again in gamigo’s epic fantasy MMORPG, RIFT, between October 21 and November 18, 2021. It’s time to change your wardrobe into something scary to prepare for Halloween… jack-o-lanterns and skulls all around, please! Players have to complete weekly and daily quests and earn event currency to buy spooky mounts, eerie pets, accessories, devilish costumes and much more!
• Echo of Soul – Autumn celebrations are all around Friggard in MMORPG Echo of Soul – but something spooky… something twisted has slowly crept into this world, casting its shadow upon the realm. Between October 20 and November 24, 2021, players can travel to Bernicia and talk to its citizens about Halloween. Doing so will lead them on their path to help drive away Kostus, the Halloween Party disruptor and to receive rich rewards.

If that wasn’t enough, gamigo will be hosting a spooktacular #gamigoween stream on Twitch on Thursday, October 28 at 18:00 CEST / 9:00AM PDT / 12:00PM EDT. During the stream, you can look forward to our team celebrating Halloween in many of our games along with some awesome giveaways.

Last, but certainly not least, are our Scare and Share contest and Sweet Treats raffle which run until November 12. Details for both can be found on our gamigoween website: https://gamigo.net/gamigoween

With so many tricks and treats awaiting players across multiple gamigo games, on Twitch, and online, we recommend having several candy buckets available for the avalanche of rewards that can be earned. Just don’t earn too much at once or else you might end up with a tummy ache.