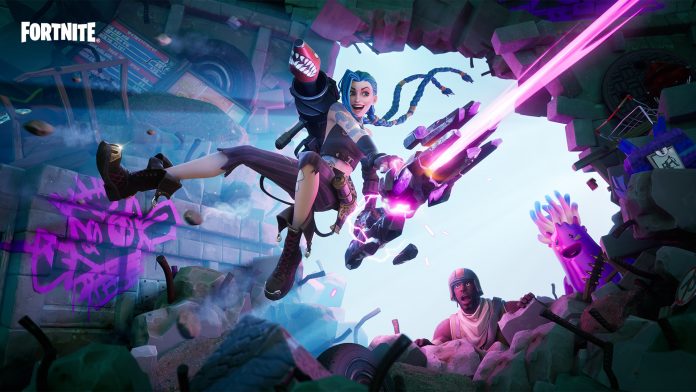 Riot Games and Epic Games partner to bring a selection of the Riot Games Product Portfolio to the Epic Games Store
Today Jinx, a popular League of Legends Champion and main character in its upcoming animated series, Arcane, is joining the world of Fortnite.
This collaboration between League of Legends and Fortnite marks the first League of Legends champion featured in a non-Riot game. A multitude of Jinx themed items will be available in the Fortnite Item Shop starting today, November 4 at 8 PM ET, including:
Brandon Miao, Cross-Product Experiences and Partnerships Lead, Riot Experience (XP) at Riot Games: “Fortnite has executed high profile collaborations and entertainment experiences while remaining committed to bringing players content that enriches their experience both in and out of game, a dedication we share and admire. We hope fans will enjoy seeing Jinx, one of our most iconic League of Legends champions, in Fortnite to celebrate the launch of Arcane.
To celebrate the entrance of Jinx into the world of Fortnite, Riot is also bringing a selection of the Riot Games product portfolio (League of Legends PC, Teamfight Tactics, Legends of Runeterra, VALORANT) to the Epic Games Store.
Steve Allison, Vice President and General Manager of the Epic Games Store: “Riot Games is one of the world’s best developers and creators of groundbreaking entertainment franchises. We’re excited they’ve chosen to partner with us to bring their titles to millions of new players through the Epic Games Store.”
This partnership is the first collaboration between Epic Games and Riot Games, the latest activation in the recently announced RiotX Arcane event, a month-long experience bringing all of its products together to celebrate the launch of Arcane, Riot’s first animated series.
Arcane premieres on Sunday, November 7 at 3AM CET on Netflix globally. It is the first Netflix series to debut with co-streaming exclusively on Twitch, allowing content creators on the service to broadcast themselves watching and reacting to episode one with their communities. The first TV series based on the League of Legends universe, the show will follow the origins of two iconic League champions, and the power that will tear them apart.

Three days until the world of @LeagueOfLegends comes to life in #Arcane the animated series. We wish you safe passage to Zaun, friend. pic.twitter.com/PCZPoXYspE

About Riot Games
Riot Games was founded in 2006 to develop, publish, and support the most player-focused games in the world. In 2009, Riot released its debut title, League of Legends, to worldwide acclaim. League has gone on to be the most-played PC game in the world and a key driver of the explosive growth of esports. As League enters its second decade, Riot continues to evolve the game while delivering new experiences to players with Teamfight Tactics, Legends of Runeterra, VALORANT, League of Legends: Wild Rift, and multiple work-in-progress titles, while exploring the world of Runeterra through multimedia projects across music, comic books, TV, and more. Riot has also launched a publishing group, Riot Forge, to collaborate with third-party developers on additional games set in the League universe. Founded by Brandon Beck and Marc Merrill and led by CEO Nicolo Laurent, Riot is headquartered in Los Angeles, California, and has 3,000 Rioters in 20+ offices worldwide.

About Fortnite
Fortnite is the completely free online game where you and your friends fight to be the last one standing in Battle Royale, join forces to make your own Creative games, or catch a live show at Party Royale. Download now and jump into the action on PlayStation, Xbox, Switch, Android, PC, and Mac. Learn more at www.fortnite.com.