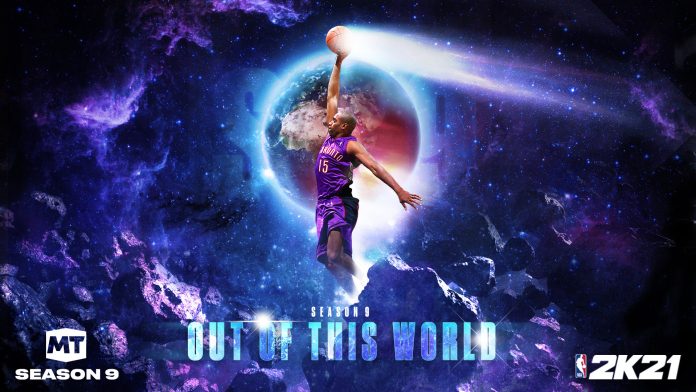 What a year it has been in MyTEAM! We wanted to start and end this Courtside Report with a Thank You to everyone who has picked up the sticks, assembled their dream team in MyTEAM, and battled it out on the virtual hardwood. But we’re not done quite yet with NBA 2K21, we have one final three-week Season for you to experience with MyTEAM Season 9: Out of this World!

We’re launching this Season with the appropriately named Out of this World packs. These packs will not only feature a few silver screen favorites, but 4 special cards for the stars of the upcoming Space Jam: A New Legacy movie! Add special Dark Matter versions of Damian Lillard, Klay Thompson, Anthony Davis, and of course LeBron James to your collection, featuring artwork for the new Space Jam movie right on the cards.

If you want to earn a quick Out of this World Deluxe Pack, accompanying this release will be a Triple Threat Challenge where you take on the Goon Squad with LeBron on your side. As always, if you need a LeBron to lead your trio, enter EVO-LeBRON-JAMES for the previously released branching Evolution LeBron. Defeat the challenge, add a guaranteed Galaxy Opal or Dark Matter card to your collection, and then continue to evolve this LeBron however you like.

We have one more debut for this Out of this World release. NBA 2K21’s first G.O.A.T. cards! There will only be 5 cards released in the G.O.A.T. collection, starting with LeBron James and Michael Jordan! All G.O.A.T. cards released will feature 99-everything attribute ratings and complete Hall of Fame badges on their cards. Be on the lookout for all 5 G.O.A.T. cards this Season!

The return of the G.O.A.T. does not diminish our Invincible collection! All of the top rewards in Season 9 will receive the Invincible treatment, so let’s look at all of the upcoming rewards! This Season, begin your path to Level 40 with Invincible Isaiah Thomas! That’s right, the mighty Celtics PG, the King of the Fourth, is your Level 1 reward for simply entering the Season menu after Season 9 drops. Once again, there will be 150,000 XP available from Day 1 of Season 9 for you to earn our Level 40 reward, Invincible Dr J, Julius Erving!

We also have these Dark Matter Invincible reward cards waiting to be earned by you:

Plus, you can pick up Invincible Hakeem “The Dream” Olajuwon from the reward market, with no limit on the number of redemptions for his card.

There is one final Dark Matter Invincible card to be earned, our featured player for the Season, Vince Carter! You can pick up Half-Man Half-Amazing’s reward card by earning 99 Stars in the final tier of 2K21’s Domination, Best of MyTEAM! Take a look back at all of the best cards this year by taking on 33 teams based on the wide variety of released cards this year. From Flash and Glitched cards, to Out of Position, Mystery, Throwback Moments, Season Rewards, Spotlight Sim Rewards, and so much more! This final tier will also include Dark Matter Allen Iverson for earning 33 Stars, and Dark Matter Paul Pierce for earning 66 Stars.

With this being the final full MyTEAM Season of 2K21, we wanted to include the best farewell game in NBA history for our final Signature Challenge. Compete in Kobe’s final game, match his unparalleled 60-point goodbye, and earn a guaranteed Kobe VI shoe and a Hall of Fame Badge. Enter MAMBA-FOREVER-2K21 for a guaranteed Kobe card that is eligible to compete in this Challenge, and to keep in your collection.

As promised, thank you one more time to everyone who loaded up NBA 2K21’s MyTEAM. We can not give enough praise to everyone working behind-the-scenes, in all the facets that make MyTEAM and NBA 2K21 great. This year we’ve navigated the global pandemic to create the first MyTEAM mode to add a new way to play after release with Triple Threat Challenges, the first (and hopefully only!) remote $250,000 MyTEAM Unlimited Tournament, a plethora of new features, as well as seamless cross-progression across two console generations. We’ve experienced the end of two NBA seasons in NBA 2K21, and we can’t wait to show you what is coming NEXT!